I bought an NFT token, I invested in my first NFT. A SmartFOX NFT.

What is an NFT token?

What is an NFT? An NFT is a Non-Fungible Token. OK what is that?

A non-fungible token is a non-interchangeable unit of data stored on a blockchain, a form of digital ledger, that can be sold and traded. Types of NFT data units may be associated with digital files such as photos, videos, and audio. Wikipedia

NFT’s have risen in popularity over the past 15 months or so and they are most often seen as a piece of artwork. You may have heard of Bored Apes. Pictures of apes literally are selling for hundreds of thousands of dollars. They are digital artwork that are on the blockchain, on Ethereum and other blockchains such as Solana.

Some NFT’s have a physical counterpart, once purchased you can then receive the physical item – there is so much utility available for NFT’s.

Why did I buy an NFT token?

I bought an NFT as an investment and to be able to take part in an ecosystem including access to Members Only Benefits and Features.

How can I make money with an NFT?

People are producing artwork digitally, then it’s minted. That piece of artwork is certified on the blockchain. What’s going on in the NFC space and I’m just sort of new to it, is that people are buying these tokens they’re minting them for a very small amount, and then quickly they raise in price in popularity because people want the artwork collectibles. And then people start selling them for big profits. And there is a lot of money being made. People flipping NFT’s, they’re buying them for $15 and what have you and various amounts and then sell them on for thousands of dollars worth in ethereum.

Am I expecting to make money on my NFT?

People may make an offer for my NFT and if the offer is right I may sell it on.

On OpenSea.io which is a marketplace for NFT token, artwork, digital artwork. People can make offers on your items. People may offer me money for that. So I don’t know, depending on how good it gets and how big it gets and popular it gets, as more people buy it, the price goes up and it may become attractive to me and I might sell it, but I’m interested in this ecosystem and what is going to come.

They’re going to air drop me some coins. SmartFOX haven’t said when, but they’ll be airdropping me because I got in early. I bought my NFT before the closing date to receive the airdrop. I got in on that list and they’re going to drop me 100,000 of these coins.

And if that coin goes up in price, then that air drop, the value of that coin will go up in price too. And then I can use those coins in this ecosystem for the various functions that SmartFOX is building at the moment.

In the near future I will be able to stake my NFT to earn coins.

What did I buy? 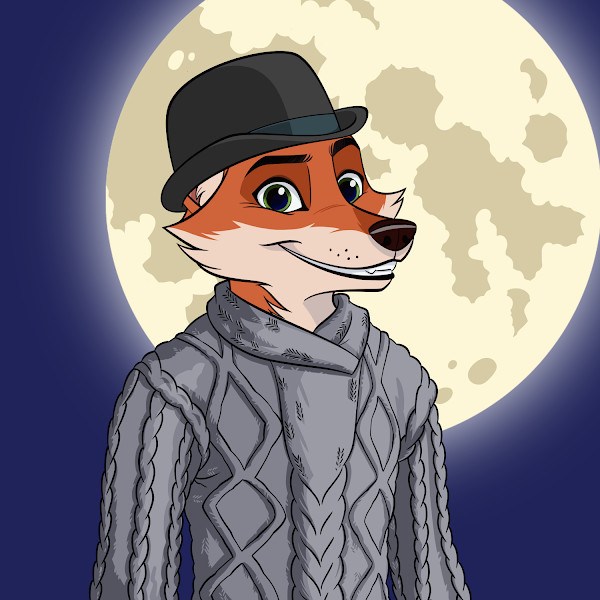 So I bought into the SmartFox collection which is a new collection of NFT artwork. I minted a randomly chosen NFT. What is minting? Minting an NFT refers to the process of turning a digital file into a crypto collectible or digital asset. This is my NFT. It’s a Fox. He’s got a bowler hat on and he’s got a sweater on. I call him the Gentleman. That’s my name the Gentleman.

How to learn about NFT?

I use the Binance app on my phone to educate myself, they have an NFT education section and I have used YouTube, learning a lot from the channel called VoskCoin.

What do you need to buy an NFT?

Metamask wallet on the Ethereum blockchain. You can find the metamask wallet here: https://metamask.io/ The wallet comes as a standalone app on your phone and/or a Browser extension for your Internet Browser on your desktop.

Other Utility of an NFT token

Your home could be split into NFT tokens. If you bought one of those tokens, you could buy a section of a house as a token and then the house price goes up. You could sell that section, that NFT for a profit. So NFT’s have multiple uses. They’ve got art attached to them, which is one of the main things that everyone sees out there on YouTube and social media. It all seems to be artwork but there’s a lot more to it. And NFT’s will transform everything!

People are talking about going to the cinema, your ticket is an NFT token, a collectible ticket to go to the cinema! So you could sell on your cinema ticket which was to the first showing of some famous film, for example. So it’s collectible. You’re creating collectibles. So that ticket I bought for whatever might go up in price in the future. You can attach this technology to all sorts of things and then there’s the Metaverse.

It’s not something I’m really interested in but you can go in this Metaverse world and people are talking about NFT shoes. People making Nike clothes. Nike trainers. They’re making digital trainers to wear in the Metaverse.

This is not financial advice, I’m just saying what I have done, do your own [re]search – DYOR.

There is risk and there is reward in the NFT space. I brought this NFT because I like the artwork and I believe in the project and want it to go forward, so buying in helps the project on its road map and also I see the transformative effect NFT tokens are and will have and I want to be part of that.

For further reading on NFT’s I highly recommend this blog post(external): NFTs for Beginners: Everything You Need to Know About The Latest Crypto Craze

If you interested in Crypto checkout my Crypto page

Clicking any of the links below I may earn a commission from any qualified purchases.

I earn 6% interest on my Bitcoin with BlockFi. That interest is paid in Bitcoin. Other crypto is available to earn interest on such as Ethereum with varying interest rates. Earn Compound Interest here.